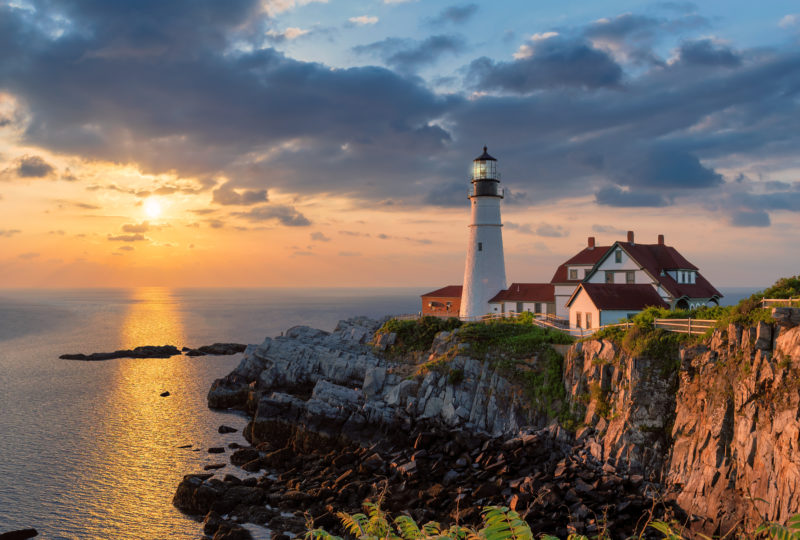 What is included in the New England Region

The New England Region is comprised of six states located in the eastern United States. New Hampshire, Maine, Vermont, Connecticut, Rhoad Island, and Massachusetts make up the New England States. There are 71,991 square miles of land throughout the New England states which is about the size of the state of Washington. Technically, it’s possible to drive the New England route in a day without seeing any sights.

This question comes up a lot when planning a New England Roadtrip itinerary and deciding how to divvy up the time. Maine is the largest state by far – accounting for half of the whole New England Region. On the other end of the size spectrum is Rhode Island, which is the smallest state in the United States.

Where is Acadia National Park

Acadia National Park is located in Southeastern Maine next to the small seaport town of Bar Harbour. It’s important to highlight that Acadia is the ONLY officially designated National Park found on the east coast of the United States. The next closest national park is Shenandoah National Park which is located in Virginia, only 800 miles west of Acadia!

There are basically two different routes that you can choose from for a New England Roadtrip itinerary. Clockwise or counterclockwise. It’s completely up to the traveler to choose the order the states go in and where the trip departs from. Most people prefer to drive up the coast first towards Acadia and then wrap back north and around to where they started. I suggest looking at the top things to do state-by-state and adding them to a google map. Then plan your route based on what you want to see.

When is the best time to visit the New England Region

There is no bad time to travel to the New England states. All four seasons provide a completely different experience. For folks who love winter activities, they will find some great ski resorts in Vermont. The spring and summer months are a fantastic time to drive along the southeast coastline through the port towns. During autumn, the fall foliage in New Hampshire is on a whole other level!

Boston – There are so many things to see and do in Boston! Here are some of my favorites for your road trip.

Salem – Famous for the Salem Witch Trials. Try and visit in October during Halloween for a unique experience.

Charlton – Famous for being home to one of the top breweries in the world!

Newport – Experience the New England vibes from this city on Aquidneck Island!

Given Acadia is the only National Park on the East Coast, it certainly deserves its own section on any New England Roadtrip Itinerary. Below is everything you might need to know for a successful trip to Acadia National Park!

Directly outside of Acadia National Park, there are a variety of hotel accommodations that range from budget to luxury. Many travelers choose to stay in either Bangor or Bar Harbour. I found a great value hotel directly outside of Acadia National Park (3 Minute Drive) called the Acadia Pines Motel. Using Chase Ultimate Rewards points, this only costs 10,100 points per night via the travel portal and receiving the 50% Sapphire Reserve Bonus. This equates to $151.50 saved per night which is huge. If you want to learn more about using points to cut travel costs – check our Essentials to Traveling with Points!

Top things to do at Acadia National Park

There is so much to see and do but here our my favorites!

Watch the Sunrise from the top of Cadillac Mountain. You can either drive or hike to the top. I recommend driving up and leaving an hour prior to sunrise as this is a very popular activity. It’s truly beautiful and in fact, is one of the places in the United States that is first “touched” by the rising sun during a portion of the year.

There are tons of top hikes at Acadia National Park – here are my two favorites. The Beehive loop trail is about a mile and a half roundtrip but is quite strenuous. There are portions of the hike that require using upper body strength to pull yourself up and some narrow ledges that are high up. If you are physically limited or nervous about heights, I would not recommend going up. The views are quite beautiful from the top for those who trek all the way up.

My second favorite Acadia National Park hike is Bubble Rock which is a mile up and back. It does require going up a steep incline but is worth the effort for the unique views of Bubble Rock. From the top, the beautiful Jordan Pond stands out like a hidden gem. If you’re feeling up to it, you can hike down the South Bubble Trail to the Jordan Pond Loop Path!

The best meal can be found at the Jordan Pond House which comes with some fantastic views of the pond. Folks rave about the lobster stew, pop-overs, and strawberry jam!

Drive around the Full Park Loop road which runs 27 miles throughout the park. This is a very popular way to see the fall foliage from the road.

Watch the United States daily flag raise every morning outside the Acadia National Park Hulls Cove Visitor Center. A park ranger brings the flag out and raises it every morning at 8:30 a.m. when the park center opens.

Take in the sunset from a Kayak on the water! The organized kayak tours do sell out quickly so be sure to reserve well in advance. The National Park Sea Kayak Tour company is a very reputable option that employees registered Maine Kayak guides.

What’s your favorite thing to do on a New England Roadtrip?

Tweet
Share278
Share
Pin228
506 Shares
Editorial Disclaimer: Opinions, reviews, analyses & recommendations are the author’s alone, and have not been reviewed, endorsed or approved by any of these entities.
PrevOlder ArticlesHow donating Plasma can make you money!
Newer ArticlesAll-inclusive travel to Cancun during a PandemicNext