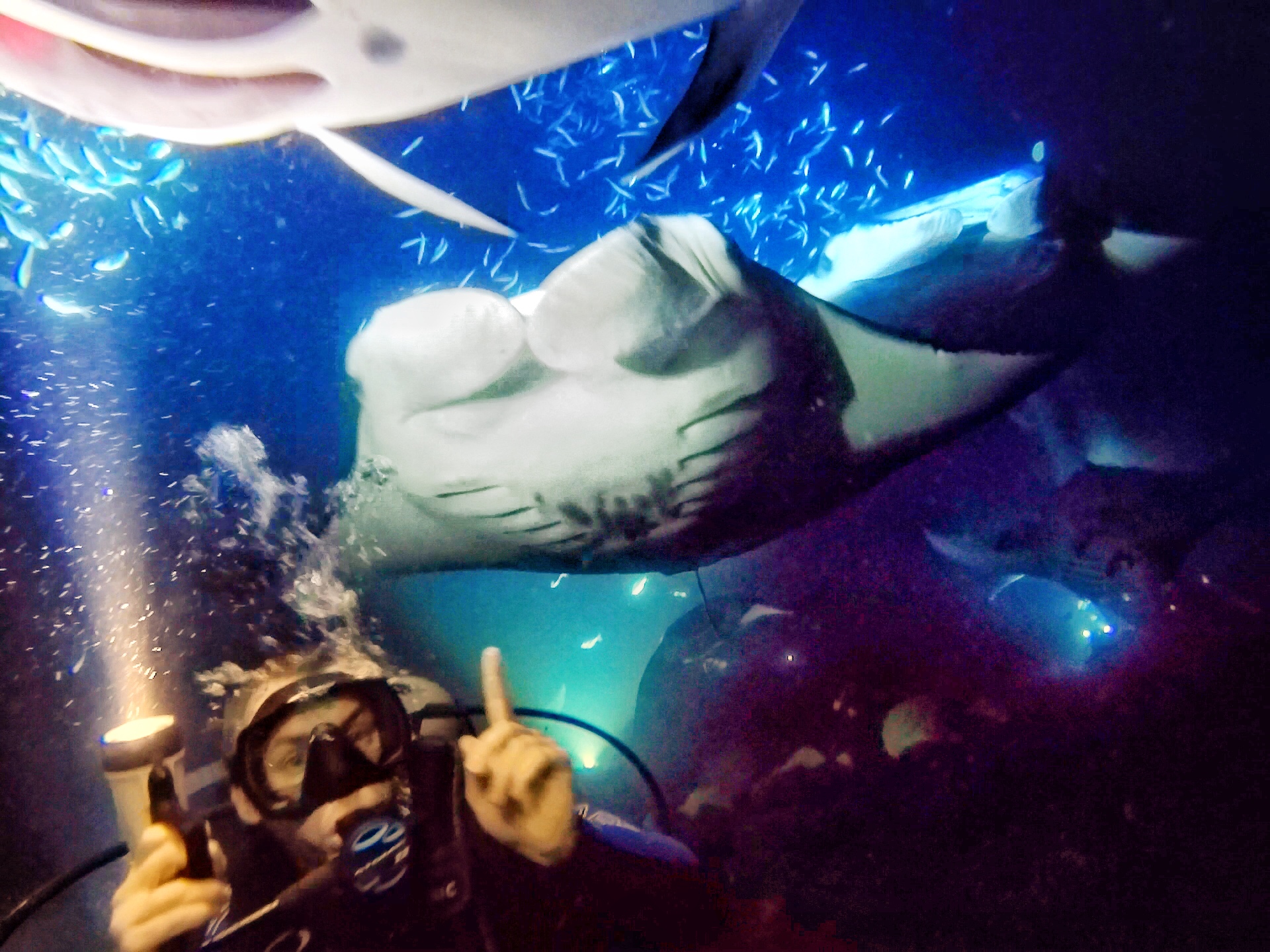 After 30 days in Thailand, touching down on the Buffalo, NY tarmac was bittersweet. It’s always nice to come home but my initial thought was “where to next?!?”

One of my favorite experiences from Thailand was becoming an Open Water Certified Scuba Diver on the island of Koh Tao. With this memory in mind; I opened up my trusty MacBook Pro and googled top scuba dives in the world. Scanning down the list the first one that jumped out at me was labeled “Manta Ray Night Dive”. One click later and I was determined to turn this ambitious bucket list experience into reality. 6 months and a few credit card applications later, and I was en route to what surely would be an experience that I would hold in my memory forever.

After a good deal of research, Lisa and I decided to go with Kona Diving Company. They have fantastic reviews and are well respected in the diving community. It was really easy to book a reservation online and they were very quick to respond to our emails. We went with a full day of diving, which included 3-day dives followed by the Manta Ray Night Dive.

The drive to the boat on the morning of the Dive Day was surreal. It’s so crazy to think that only a few years ago I would never fathom that I would literally be driving to scuba dive one of the top dives in the whole world off the coast of a Hawaiian island! The rest of the day certainly led up to the hype.

The first three were fantastic and we saw a ton of awesome marine life including an octopus, a huge sea turtle and a whole garden of eels! Luckily we were given a break in between the morning dives and the afternoon dives as we were STARVING! We grabbed a quick bite to eat at a place called Loko Wraps, and got some ! They definitely hit the spot.

Prior to beginning the 4th Dive, our divemaster gave us a great overview of the history of Manta Rays off the coast of Kona. Our boat found a good location with a few other diving companies already set up. I found out later that Kona Diving purposelessly goes last so that we get some very intimate and close encounters with the giant Mantas.

Descending down to the bottom of the ocean floor when it’s pitch black outside is certainly a different experience altogether. Armed with only a flashlight in hand; I was actually a little freaked about what we would find down there. Nevertheless, we pushed through the darkness to uncover a large light set up on the bottom of the ocean floor pointed straight up. Around the light were large rocks and divers spread about almost resembling a campfire.

The magic began when I noticed a 15 foot, 1000 pound Manta twirling and dancing around the shining light along with 11 of it’s closest friends. These 12 Manta Rays truly put on a show of a lifetime. As the other divers began to make their ascent to the surface we were instructed to remain in our positions. A close encounter is an understatement, literally. The Manta Rays feed on plankton which are attracted to light hence the flashlights. When all of the other divers departed, the seven of us remained with seven flashlights pointed to the surface.

I remember looking at Lisa and watching this HUGE Manta Ray soaring right over the top of her head devouring all of the plankton in sight. Absolutely incredible watching these mammals swim around us for what felt like an eternity. Despite the wetsuits that we were wearing; the temperature was quickly dropping without the sun and we were starting to feel the cold water throughout our core. Unfortunately, the cold temperature plus the depleted air tank meant that our divine time with the Mantas would be coming to an end. I gave one last wave and we started to make our ascent back to the surface.

The whole boat ride back we were all on such a high. Sharing each one of our unique experiences with one another. Our divemaster explained that seeing Mantas is never a guarantee but we certainly were blessed that night with a bucket worthy experience! If you are considering doing the Manta Ray Dive, we highly recommend giving Kona Diving Company a call! If you want to hear more about our trip to Hawaii and how we took on a Hawaiian Volcano, you can check it out here!

Tweet
Share
Share
Pin
0 Shares
Editorial Disclaimer: Opinions, reviews, analyses & recommendations are the author’s alone, and have not been reviewed, endorsed or approved by any of these entities.
PrevOlder ArticlesVisiting “The Club” lounge at MCO
Newer ArticlesEngagement Video!Next