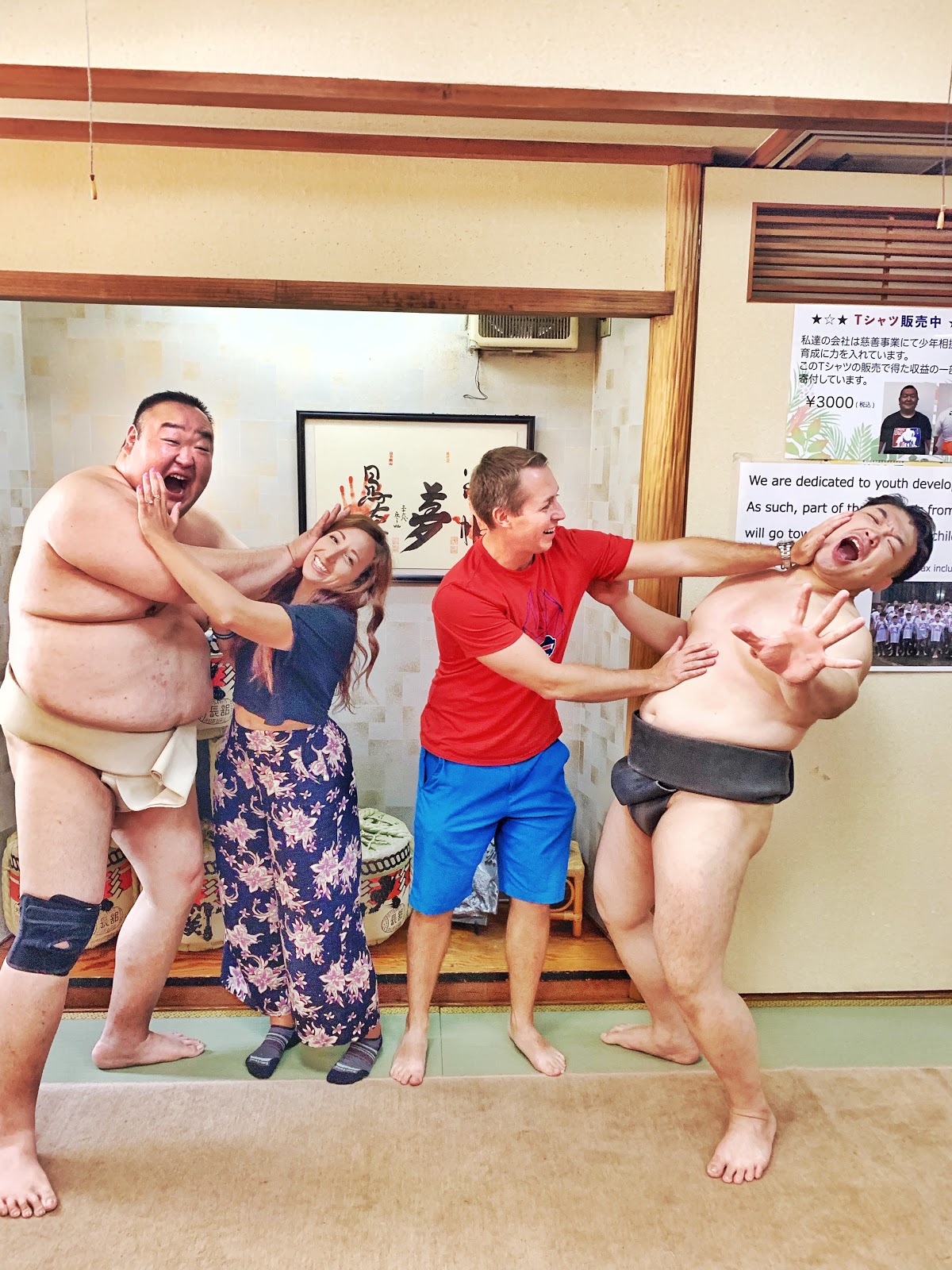 The Day I wrestled a Sumo Wrestler in Japan!

Our eyes were locked, I took a deep breath and charged into this enormous Japanese Sumo Wrestler and……he…..didn’t…..move!

Now let me backtrack just a tad to explain just how I ended up in this predicament. Sumo Wrestling has fascinated me for quite some time. Witnessing videos of these giants competing for space in the small rings or “Dohyo” has always been exhilarating and entertaining to watch.

According to a Japanese Legend, a sumo wrestling match between gods took place to determine the location of various Japanese Islands. Early on in ancient Japan, these matches were viewed as a dedication to the gods to pray for a good harvest.

Today, Sumo Wrestling is Japan’s national sport and is often a hot ticket to acquire during the annual tournaments that take place throughout the year.

Since we booked a last-minute trip to Japan; time certainly wasn’t on our side to get tickets ahead of time for the July tournament. The tournaments only take place 6 months each year and tickets sell out quickly!

If you are planning a trip to Japan, the months that the tournament takes place are January, March, May, July, September, and November. Tickets go on sale about a month before the event and can be pre-purchased here http://sumo.or.jp/EnTicket/

Now if you miss the boat on tickets but will be visiting Japan during a tournament you can sometimes get lucky and find tickets here. This is also great for travelers who like to have the added benefit of a guided experience.

Fortunately for us, a Sumo Tournament is not the only place where you’ll find Sumo Wrestling in Japan. After doing some research, I found that there are special lunches offered twice each week that also include Sumo demonstrations.

We booked the “Challenge Sumo Wrestlers and Enjoy a Chanko Lunch” option on Viator and started counting down the seconds.

The event began at 12:00 pm and was located upstairs above the Asakusa Chanko-ba which is located near the Sky Tree. We showed up a few minutes before noon and headed upstairs to see the show.

Seating is given out on a first-come basis so if you want to be close to the action, I’d suggest arriving at least 30 minutes before the show begins. Since we were running a little late, we ended up in the back of the restaurant which wasn’t too bad but I would have preferred to be closer.

The show began with introductions and an overview of Sumo Wrestling. The Sumo Wrestlers demonstrated the various “moves” that are involved in each match. If you didn’t know already, there’s more to it then just pushing and shoving!

Next, the wrestlers demonstrated the moves that are NOT allowed in Sumo Wrestling like punching and eye-poking.

The Sumo Wrestlers then went head to head for three rounds! It was exciting to see these guys use the moves they just demonstrated on each other and go back and forth.

In the end, there could only be one victor!

Taking on a Sumo Wrestler

Then it happened, the announcement that I had been waiting for. “Anyone who is feeling brave can get into the ring and take on a Sumo Wrestler if they dare” I stood up like destiny was calling my name and got in line to go head to head with a Sumo Wrestler. I’m not going to lie, I had second thoughts. Given I only weigh about 180 pounds and these guys tower over me but despite logic, my legs moved continues to move forward. I put on a Sumo costume that was provided for participants and stepped onto the mat and….

As you can see, he didn’t move and I went airborne!

Once I touched back down on earth, I realized just how hungry I was.

Lucky for me; it was lunchtime and the Chanko Nabe was coming right out. This traditional Japanese Sumo meal includes a mixture of pork, noodles, rice, cabbage, mushrooms and more!

Sumo wrestlers typically eat this meal after morning practice and before a nap for slow digestion and bulking up. The afternoon ended with a delicious lemon sorbet treat and an open forum to ask the wrestlers questions.

I’m glad that we had the opportunity to participate in this excursion and believe that it was worth every penny!

The admission cost for the show and lunch is $114 per person or 11,114 Capital One Venture Rewards Credit Card Miles.

Basic Thoughts: We love these Venture Miles as they are incredibly easy to use and redeem. You also always earn an unlimited 2x miles on every purchase, every day.

Take on a Sumo Wrestler in Japan [Check]

Tweet
Share241
Share
Pin
241 Shares
Editorial Disclaimer: Opinions, reviews, analyses & recommendations are the author’s alone, and have not been reviewed, endorsed or approved by any of these entities.
PrevOlder ArticlesStep-by-Step booking ANA flights with Virgin Atlantic on Points
Newer ArticlesHow we saved $3,487 on hotels in JapanNext